Building on last week’s article, summarising the M.B.T.I. (Myers-Briggs Type Indicator) preferences, I’d like to explore the link between it and leadership styles.

In our practice, we like to refer to an old (1969) and still so amazingly actual model, Hersey and Blanchard’s Situational Leadership, which we have slightly updated: 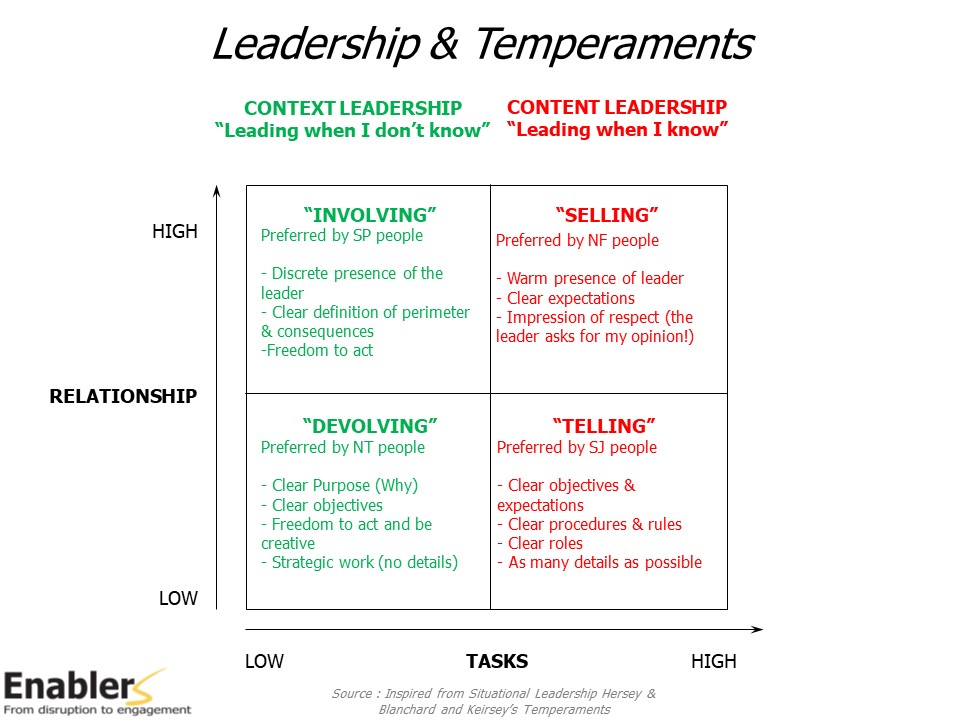 The picture here above attempts to explain how different preferences react to the different styles of Leadership:

These reflections should not be taken too literally nor rigidly. It is the situation that should be considered before any other consideration. Second, M.B.T.I. is not supposed to “put people into boxes”. My preference is NF and I remember feeling clearly safer with telling style ski instructors as I felt that my physical integrity on the slope would depend from her/his “orders” (Tell). I felt honoured and appreciated when my chief scouts, wishing to develop our self-organisation skills, were asking us our opinion prior to preparing the campsite, the food or the fire(Sell). When collaborating with NEOMA Executive Education, or our allies of StratX, I very much enjoy the friendly presence of the leading partners there who demonstrate their fullest confidence in my capacity to fulfil their mandate (Involve). Finally, I feel far more at ease writing such articles or my future book, on my own and independently, than co-writing them (Devolve).

This article’s purpose was mainly to have your reflecting on the possible connections between people preference and how to create conditions for them to flourish and two well researched tool, M.B.T.I. and Situational Leadership. Next week, we will explore M.B.T.I. and the impact of the Disruption Economy.