In my youth, I played ice hockey as a goal-tender. My school team and I even ended-up Swiss Champions of the private schools. Every training session saw me lose several kilos in sweat, due to the heavy weight (up to 20 kilos) of equipment, needed to protect us from physical contacts (I still have the scar of a skate hitting my face once I dived to save our goal, as protecting masks were not compulsory on those days) and from a hard rubber puck that can reach the speed of 150km/h in the top leagues (from which we were far).

So when I saw a professional goalie of the very high level KHL (Russian professional league) perform an amazing series of artistic skating figures, I first smiled. But something deeper was making me play this clip again and again. It was not just the Strauss Waltz… It was something else: In ice hockey, goal tenders are “monuments” (I must have been the only exception). They wear a different attire which makes them intimidating, they take very high risks with their physical integrity. They are the last piece of defence and frequently have to confront, alone, due to the speed of the game, the forward players of the other team. The opponents will try to physically provoke them and they need to impose their presence early in the game. One of their back players “sacred” mission is to protect them since, a bit like turtles, they are slow to get back on their feet, disturbed by the carapace of their protections and vulnerable against fast skating opponents. So I admired this “divinity” who had accepted to come down of his pedestal, make himself human and vulnerable, forgetting for one moment to take himself too seriously. And I was wondering: “Will the other players and spectators respect him more or less after that? 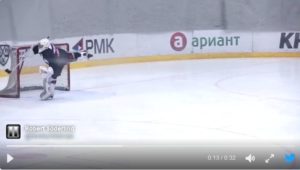 Incidentally, a few days later, I think I got an answer to my question, although in a totally different context. A charismatic and, to say the least, “very present” Business Leader had invited the managers of his organization to engage them on the new strategy, designed by his colleagues and himself. First, a few facts woke my curiosity up: His organization had made an employee survey, sent to hundreds of people and got a never seen (by me) before 100% response rate! I wondered how this was possible. Soon after, I thought I understood a possible reason for it: I was told that, like every year, the leader had spent his week-end to hand write a personalized letter to each and every participant to his meeting. I even found mine upon returning from the team dinner. I was very surprised. I do not know many CEOs who hand write personalized letters to their teams on their week-end time. This might have explained the respect he got in return from his employees, all responding to his survey.

Then, I saw something that was a real parallel to what we see this KHL star do on ice: They both let go of their ego and “put themselves in danger” in front of their audience.

Just like the goal tender, by making himself vulnerable, taking a personal risk, going out of his comfort zone (which happened to be the key message of his strategic intent), the Business Leader saw the respect and support of his followers further increased.

I stopped short of recommending him to wear skates but, trust me, his team had prepared something far more scary for their dinner. And this will remain confidential 😉

← Prev: VW to slash 30k jobs: are they creating or reacting? By Nick van Heck Next: Strong Content Leaders get compliance, not commitment! →