What do US contemporary business writer, Patrick Lencioni, XXIst century most famous neuroscientist, Portuguese Professor Antonio Damasio, Ancient Greece philosopher Aristotle, and Chilean born psychologist and mathematician Marcial Losada have in common, apart from the fact that we often quote them in our work?

Lencioni came up with the observation (see article on our blog) that teams that were focused on business results could only do it because they consciously cultivate their “Trust” in each other. Lencioni’s logic goes as follows:

As recently shared, Prof. Antonio Damasio’s indirect contribution to business was to demonstrate that logic and emotions are two essential drivers in helping people migrating from intention to action. Whereas our rationale acts as a powerful filter about what to do or not, our emotions are what prompts us to act. Any leader intending to engage their followers into profound change would be well inspired to remember this…

Aristotle’s Logos, Ethos and Pathos are central to our intervention philosophy and book. Centuries before Damasio demonstrated it through neurosciences, Alexander the Great’s mentor, knew that the way he would need to engage people through Logos (rationale, logic and clarity). He was also aware that his own actions as a leader would be scrutinized by his followers. He therefore invented the concept of Ethos, which has become in modern leadership literature, “Walk the Talk”. Finally, he intuited that emotions should be linked to the two other agendas. He called this Pathos, or emotionally engaging people into action. Ledoux (another neuroscientist) reckons that the fastest way to enter people’s Pathos is via stories, metaphors, symbols and gestures.

This brings us back to Marcial Losada, the Chilean psychologist and mathematician, quoted several times here. Re-reading some of his articles, I came to the conclusion that the verified result of his work with 60 teams of executives, when he was teaching at the University of Michigan brings it all together: 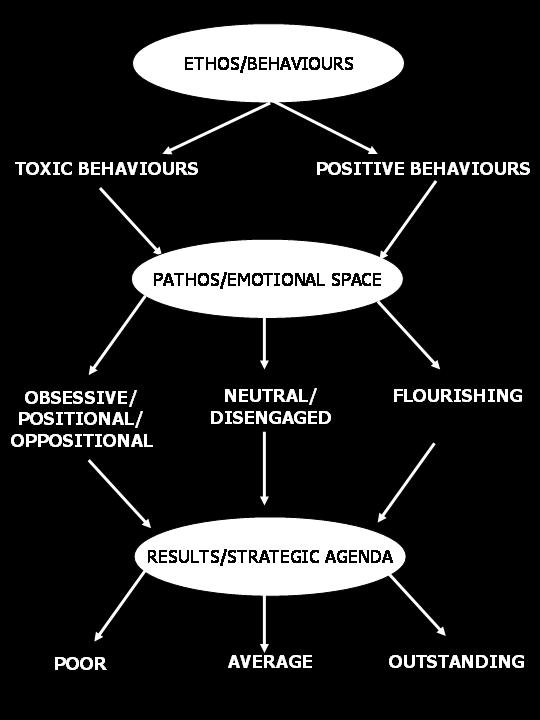 I find fascinating that such various fields of knowledge as Business, Neuroscience, Philosophy or Psychology, at very different time of mankind History came with such aligned concepts. The logic of the articulation of the intellectual, behavioural and emotional agendas is compelling to me. I would like to encourage you to observe your next Management Team meeting under this angle and find if behaviours truly contribute to create the emotional space which will, in turn, determine the quality of your team’s intellectual output.

Have a good week, mine will be between Munich and Paris, Didier