In a non-descript, grey and often wet corner of East Manchester, just off the ring motorway, you will find a large furniture shop with the not especially inspiring name of ‘Housing Units’.1 There are many other stores in the Greater Manchester area from which to furnish a house, but there is something unusual about a visit to Housing Units. If you stand at the bottom of the main staircase for a few minutes and watch people descending they will, almost without exception, smile at you. So what possibly could be going on upstairs to make people so happy? A lingerie display with real live models? George Clooney and Brad Pitt doing guided tours? ‘Mood enhancing’ drugs being handed out?

Whatever it is, you feel positive because you’ve just had several strangers look you in the eye and smile warmly. In fact, it has reminded you that earlier, when you approached the front door of the shop, two distinguished looking gentlemen in full uniform of top hat and tails greeted you with a smile and a genuine “good morning sir”, or “good afternoon madam” and held the door open for you. Most importantly, these are not the infamous ‘Pan-Am smiles’2 where the mouth is smiling, but the eyes are cold (so called, because it was reputed that Pan-Am staff had the phoniest smiles of any airline).

After an enjoyable walk around the top floor, you decide to head back down. There, in large letters, at eye level above the stairs is the quote “If you see someone without a smile, give them one of yours”.3 It is this amusing aphorism that raises a smile in most people who read it, and causes them to immediately share their pleasure with any gloomy people they pass in the next minute or so. Behaviour breeds behaviour, and the mood is subtly, but noticeably lifted.

Is this just a bit of fun, or does it have a positively correlated impact on consumer behaviour (or as they would say it Manchester; does it make the punters buy more stuff)? Erik du Pleiss, author of “The Branded Mind, What neuroscience really tells us about the puzzle of the brain and the brand”,4 would recognise the effect. Du Pleiss has taught neuromarketing at Copenhagen Business School, but is not a flag-waving advocate of the discipline; in fact he has a healthy scepticism for some of the recent inflated claims made, and even goes so far as to describe many as ‘hype’ or ‘neurobullshitting’. He does however, revisit the research with a critical eye and bridge his findings to psychology, biology and business. His conclusions are as relevant to leaders trying to engage their people in strategy and change as they are to branding, selling or marketing.

So why is making people smile or connect with strangers good for business? In his book, Du Pleiss helps us understand how positive (or negative) experiences stay embedded in our emotional memories and resurface when it comes to decision making. He builds on the findings of António Damásio5 who challenged the orthodoxy that decision making can be thought of as emotional versus rational. He said that they are inextricably interlinked, because of the way our brains are built. The critical point is that our decisions are made rationally, but are influenced strongly by our memory. Emotions cause us to remember events with more intensity. When we recall such an emotionally-amplified experience, it gives extra weighting to help us decide whether to repeat, ignore or avoid similar situations. Demasio calls these feelings somatic markers. (The word comes from soma; Greek for body). Negative somatic markers manifest themselves as an unpleasant gut feeling when a troubling experience is recalled, whilst the reward centres of our brain can be stimulated when a positive emotion is triggered. Often we will not be conscious of these automatic signals, but they do help us quickly filter possible alternatives. Some options will be rejected immediately. Others will invite closer attention by our rational brain. Importantly, he concludes: “There is still room for using a cost / benefit analysis and proper deductive competence, but only after the automated step drastically reduces the number of options.” In summary; it seems that emotions speed up our decision making by reducing the number of options we have to weigh up.

Many people who visit the Housing Units store are browsing. They will probably visit several other similar shops to compare products and prices. It is likely they will also look online. However, the emotional memory of warm staff and friendly shoppers will give a small but important competitive advantage when it comes to the rational choice of where to spend money. Also, those who had visited to buy something anyway are more likely to feel comfortable in the store, stay a little longer and perhaps make an additional purchase.

So how does this relate to leadership and the need to engage others in a vision? Shall we just smile lots and try and make everyone happy? That may help; though if you have bad news or a tough message to deliver and are grinning like the proverbial village idiot, don’t be surprised if the reaction is not all you hoped for. We have known for a long time that there must be congruence in your message if it is to have real and lasting impact, but now we are starting to understand why.

Later in his book, Du Pleiss explores how Electroencephalography (EEG) is used to measure the effectiveness of adverts. Advances in equipment and speed of testing mean that large samples (hundreds of people) are now giving data that can be used to understand why some messages stick and why others drift away. A great example is that of the well known Dove ‘Evolution’ advert. Follow-up surveys identified this as a hugely powerful campaign; it is engaging, emotionally resonant, and a powerful communicator of the core idea that we should be encouraging real, rather than artificial, beauty.

Du Pleiss writes: “Data from the company EmSense6 provide a powerful illustration of the journey viewers take. Figure 18.3 demonstrates, while the model is being ‘made up’, positive emotion actually rises (which is not something viewers report verbally). There is also a crescendo of both positive emotion and cognition at the moment it is revealed that the film is about the making of an ad; as understanding blossoms and the cleverness of the idea is apparent. This is crucial to the overall positive reception the film generates. However, it is also clear that as the implications of the moment sink in, positive emotions decline as the point of the ad is considered, which is what gives the communication such power.” 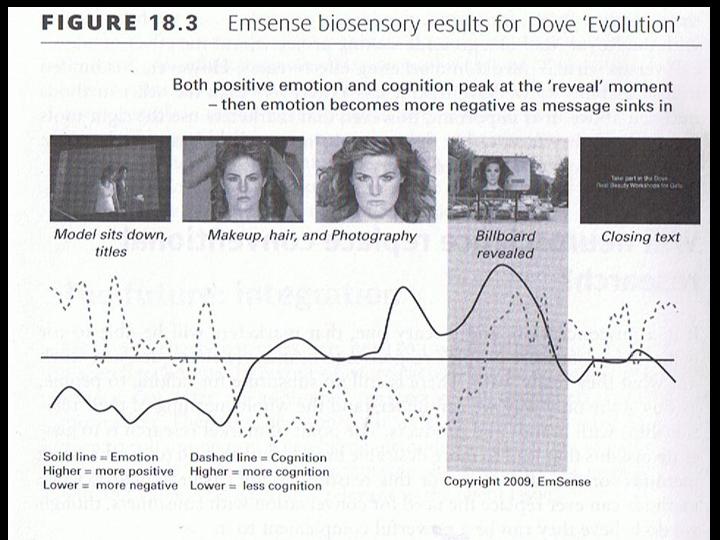 The message for leaders attempting to engage their people is clear: To ensure a message lands with an audience and sticks in their minds, it is not enough to create just a positive experience and a powerful emotional narrative. Neither is it sufficient to concentrate your efforts on building a robust and compelling intellectual message. The intellectual and emotional agendas (the logos and pathos) need to be aligned, mutually-reinforcing and synchronised.

A final example from Erik du Pleiss is about a company who so nearly got it right, but missed an important nuance. A very well known advert from Skoda UK in 2007/8 saw a new model, the Fabia, built entirely from cake. It is a very enjoyable advert, with a fun storyline and resonating music. It triggers many positive emotions, and was found by surveys to very powerfully endorse the Skoda brand.

However those same surveys found the branding of the car’s name, Fabia, to be much weaker, despite it being on screen for more time than the Skoda badge. Eye tracking technology helped identify the reason. Although the Skoda badge is on screen for less than 1 second, it dominates the screen and acts as a magnet for attention whilst being fixed to the front of the car / cake. It was also preceded by a shot where glue / icing was being applied, priming the viewer to expect something important to arrive in the next frame. Contrast this with the closing shot when the word ‘Fabia’ is visible for a full 5 seconds. However, the scene is so busy with much to look at, that eye tracking showed people’s attention was dispersed, fleeting and unfocused.

How often, when we are trying to communicate a critical message do we use ‘communication tools’ that inadvertently misdirect attention from what is really important. (A previous blog adds more on this topic: http://enablersnetwork.com/2011/powerpoint-neuroscience-and-magic/.) Even if we use them skilfully, are we clear if we would prefer people to remember ‘Skoda’ or ‘Fabia’ and craft our slides accordingly? Are the emotional and intellectual peaks timed to arrive together to multiply their impact and ensure the message sticks?

So next time you go shopping, or are at work, and are met by cheery and authentic smiles (or in some places surly indifference), remind yourselves that these moments are somatic markers that may have a lasting impact on your decisions. And also remind yourself that your behaviour will be creating such markers for others. Go on… Smile… The world will not only smile with you now, but may just give you credit long into the future.

2. The originator of the term ‘Pan-Am smile’ is unknown, but it is named after the defunct airline’s gesture of welcome. “This smile depends only on the zygomaticus major corner-tightening muscle and has also been called the “Botox smile” because, like the cosmetic treatment, it leaves the muscles at the corners of the eyes motionless.” Reported in a study by Dacher Keltner, a psychology professor at the University of California in Berkeley.

4.  Erik du Pleiss. The Branded Mind, What neuroscience really tells us about the puzzle of the brain and the brand, Kogan Page, 2011

5. António Damásio is a behavioural neurologist and author of:

The Feeling of What Happens: Body and emotion in the making of consciousness, Harcourt Brace, 1999

6. EmSense provides “…marketers with a window into the mind of the consumer with a scientifically validated, quantitatively based means of bio-sensory measurement.” www.emsense.com