How well does your leadership team keep your iceberg afloat?

Almost twelve years ago, a client and friend, Beat Blaesi (Leadership Development Director at Bank Julius Baer at the time) introduced me to Patrick Lencioni’s “Five Dysfunctions of a team” and I shared its model with you, in an article.

I now regularly work (I should say “I enjoy myself”) with a Brazilian company, called iFood. The company is active in a similar field than UberEATS, Just eat or Deliveroo. What makes them different, is an uncompromising base of values, which means that, no matter how good you are at reaching your objectives, you will not feel good there, should you not “walk the talk”. The second particularity of iFood is to be a truly disruptive organism, continuously challenging business orthodoxies, reinventing itself and expecting its people to grow and develop themselves.

During a peer coaching exercise, I was asked to rework and adapt Lencioni’s model to the Disruption Economy, which gave me a chance to be reminded of how rich it is and that it retains its full validity in the Disruption Economy. I have redrawn Lencioni’s model (originally pyramidal) as an iceberg where the basis, maintaining the iceberg stable is deeply concealed underwater and not visible. Business Results and Accountability are the visible part of the iceberg. 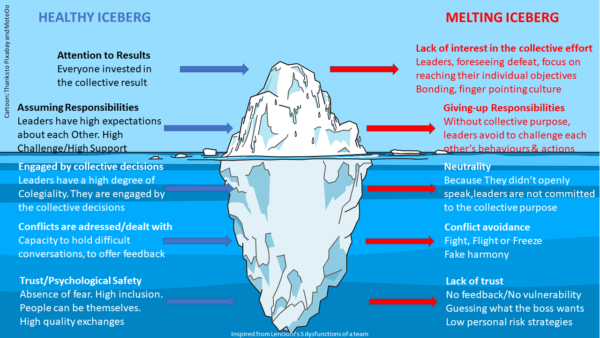 Starting from the bottom:

As an illustration, here are two examples, dating before the Disruption Economy, that display so well what flourishing communities can produce as a result:

Brasil 1970 football team, probably the best of all times:

And the Alegria of Franco Dragone (Cirque du Soleil), both operating intuitively under Lencioni’s principles.

I wish you to work with/built such vibrant communities.

← Prev: Is Harvard University Professor, Michael Sandel, just a Dreamer? Next: Maybe should you provoke a high employee turnover? →