If you wish to measure the level of Trust in your organization, look at its amount of procedures…

“Trust is good but control is better!” is a quote attributed to Vladimir Ilitch Lenine who wasn’t particularly know as a trusting leader. So is there an opposition between trust and control?

Two weeks ago, we saw how BCG partner, Yves Morieux accused misunderstood Clarity, Accountability and Measurement needs to be responsible for lack of productivity.

Those of us working with complexity know that there is nothing worse than throwing “complicatedness” at the face of Complexity as it makes things worse.

Dan Ariely, in the short text I recommended on the same blog post suggests that, when contracting, the highest value destruction happens when the letter of the contract destroys the spirit of the handshake.

I remember a story that a professor liked to share, back on my IMD MBA days: Disney parks were known for the professionalism with which they tracked habits, preferences and unconscious needs of their customers. For example, they knew there would be, by the end of every day, an average of 10 to 20 cars that would be stranded in the parking lot, the father (usually) having driven to the limit of their almost empty tank (but with the kids screaming at the back, the poor man had only one idea: get there asap) and not thinking that the burning sun would evaporate what was left of gas in the tank. So Disney had little golf carts circulating with a gallon free of oil to save the unfortunate man from a marital crisis by being unable to restart the car at the end of a long day. Wonderful isn’t it?

Unfortunately this well-intended obsession in measuring and tracking everything also drifted into creating real encyclopedias of “Do’s and Don’t’s”, rules, roles and procedures for every category of employee in the park. Learning this by heart was quite cumbersome and frustrating as you could count on the complexity of welcoming thousands of different people every day, to create incidents which were not planned nor accounted for by the manuals. And when this was happening, employees, used to refer to their Bibles, were lost and unable to take an initiative they could be punished for, since it was not part of the procedures.

To my knowledge, none of you, readers, work in such places, but armed biological, chemical, industrial, medical or transportation organizations are, amongst many, understandably submitted to similarly demanding and detailed procedures and norms. So, identical problems can arise, when procedures become the purpose and people hide behind them.

One of our ex-colleagues loved to draw the following pictures on a flip-chart, to show how to trust and empower your people: 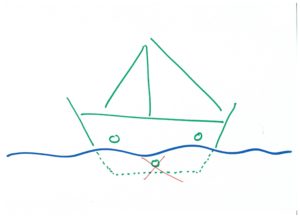 This drawing, although very simple, summarizes the point for me:

That sort of attitude will reinforce Trust on the ship, reduce the amount of unnecessary procedure and incentivize people to experiment safely.

The image that sticks to my mind is this wonderful experimental Tango. Apart from Argentinians, who seem to master it so gracefully, Tango seems so complicated, in particular for uncoordinated people such as I. But when freedom is given and a few basic rules are clarified, action becomes seamless and creativity an art.