My true education in “Change Leadership” and “Leadership that gets results” (with my apologies for borrowing the title of a Goleman article in HBR of 2000) dates back in 1998, when being challenged by a client: I was explaining that leading by fear and emotional blackmail is what had costed Brazil the 1998 final of the Football (soccer) World Cup against France in Paris. “I am more interested in understanding what the French got right” did he demand. So I researched, read, interviewed and the conclusion was that the French coach had decided to create a fearless climate in his team. The research led me to a model (inspired from Laborit and McLane) about the impact of fear on human brain: 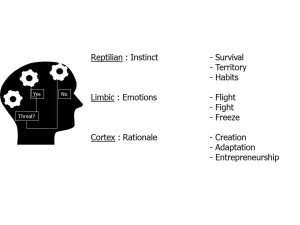 Later, another client, Beat Blaesi, Head of Development and Learning at Bank Julius Baer at the time, told me about Patrick Lencioni, who had researched what explained performance in certain teams, compared to others. In his book (The five dysfunctions of a team), if “Attention to Results” is the consequence that every leader would like to see emerge from teamwork, what created it was initially Trust. And for Lencioni, the critical condition for a leader to create trust is to share his vulnerability. Trust will, in turn diminish fear and encourage difficult conversations (those we spend an amazing energy in avoiding) to emerge. Those conversations will create commitment which will transform into accountability which will bring the much sought after “attention to results”. 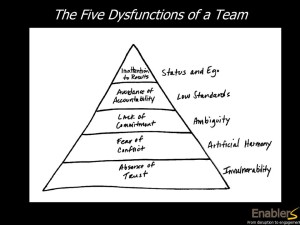 Before that, Chilean psychologist, Marcial Losada, observed 60 executive teams, each discussing an important business matter. Losada found that Behaviours could be toxic or positive. Positive behaviours created a “Flourishing” emotional space, where people would dare to contribute, admit they were wrong, build on each other’s’ points and hold  truly strategic dialogues. On the contrary “toxic” behaviours will create an oppositional culture with a low level of collective intelligence.

In the past few days, the New-York Times published an article about a two year study at Google, following 180 teams, seeking to identify what could be the reasons for which some teams produced superb results and others fell into oblivion. The study clearly identified that Psychological Safety was the most critical of all criteria.

For Google, people perform better, are more loyal, dare to be innovative, “use their minds as a tool rather than a weapon” when they evolve in a psychologically safe environment. When pressure, competition and lack of vulnerability (meaning lack of trust) emerge, the atmosphere described in the New-York Times article by Julia Rozovsky, a Google employee when talking about her MBA study group, appear. “Rozovsky’s  study group was a source of stress. ‘‘I always felt like I had to prove myself,’’ she said. The team’s dynamics could put her on edge. When the group met, teammates sometimes jockeyed for the leadership position or criticized one another’s ideas. There were conflicts over who was in charge and who got to represent the group in class. ‘‘People would try to show authority by speaking louder or talking over each other,’’ Rozovsky told me. ‘‘I always felt like I had to be careful not to make mistakes around them.’’ How many of us still live in a traditional MBA study group culture, back at work?

To illustrate my point, let me ask you: Which one of those leadership styles (I apologize to them for taking clips out of their context. My objective is not to expose them but rather illustrate a style) would get the best out of you:

Or Leonhard Bernstein? (with my apologies to the many of you who certainly saw these clips before)

Enjoy your Leadership Journey and ensure you create psychological safety for your people and teams!

7 Responses to “Create Psychological Safety or watch your organization fail!”